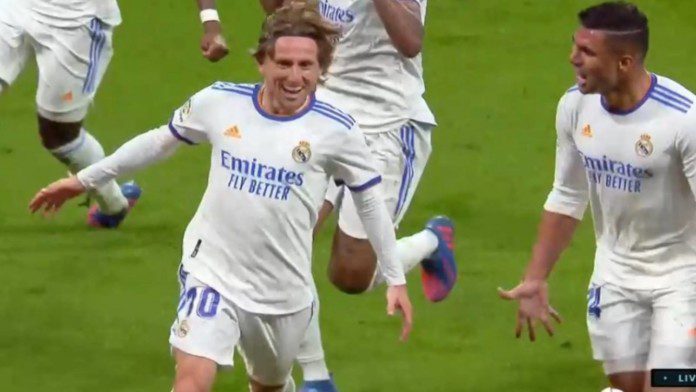 What a football half Real Madrid showed at the Santiago Bernabeu against Real Sociedad. Los Blancos didn’t have the best start to the encounter, falling behind in the first 10 minutes of half-time.

Dani Carvajal was guilty of sluggish play in the penalty area and his challenge to David Silva earned Real Sociedad a penalty. Mikel Oyarzabal made no mistake and scored from the penalty spot to give his side a 1-0 lead.

Real Madrid have largely been the better team since conceding, but struggled to create direct chances for much of the half-time. They didn’t have to create much as their French prodigy Eduardo Camavinga equalized with a sensational solo from around 30 metres.

The 19-year-old threw in a fearsome shot with his left foot to nestle the ball in the top right corner, leaving Alex Remiro dead in goal. Just when everyone thought they’d seen the best goal of the night, Luka Modric stepped up and showed everyone what he can do with a football at his feet.

The Croatian midfielder capitalized on Real Madrid’s attacking insurgency and scored a thunderous goal with his left foot. Karim Benzema and Carvajal quickly combined a corner and Modric found himself on the ball near the penalty area.

Playing the ball purposefully, the 36-year-old got past David Silva to get an angle on goal and launched a flick with his weaker foot and the ball shot into the top left corner, sending Alex Remiro through again with the Foot lagged the spot.

Premier League fixtures, COVID-19 postponed: Everything you need to know about who’s playing and who’s not

Will the islanders trade to replace Ryan Pulock?