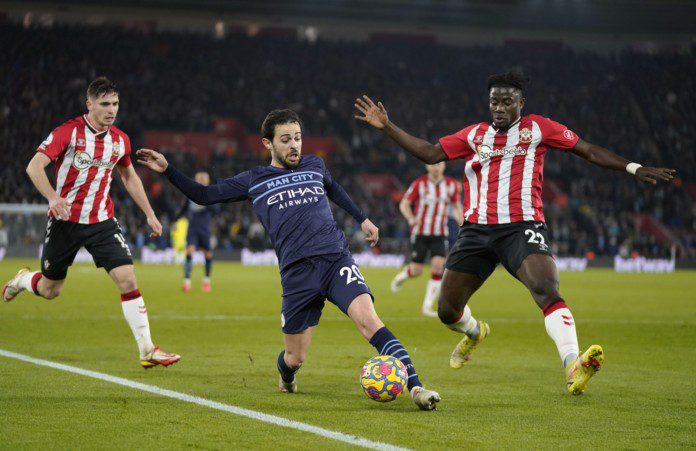 Southampton pulled off a thrilling 1-1 draw against the Premier League leaders, Manchester City. The Saints brought an end to City’s 12-match unbeatable run. Kyle Walker Peter’s early goal set them up brilliantly, but City did enough to get the equalizer through Aymeric Laporte in the second half.

Let’s take a look at the player ratings for Southampton vs Manchester City match:-

Fraser Forster (7/10): The Southampton veteran keeper was exceptional throughout the match as he came out with some strong saves. However, Forster was not able to hold on much longer as Man City came in with the equaliser to steal his clean sheet.

Mohammed Salisu (7.5/10): The Young Ghanaian center back was strong creating like a wall as he made some hard tackles and vital interceptions to keep the ball out of the box and far away from any danger.

Jan Bednarek (October 5): The Polish defender made some strong tackles and was attentive to recover balls. However, Bednarek could have been a little better with his judgment and positioning to tighten the Southampton defense further.

Romain Perraud (5.5/10): The French left-back was not up to the mark even though he was strong physically to control the ball on his feet. Perraud was caught out of possession several times which could have created a lot of trouble for Southampton.

Kyle Walker-Peters (October 8): The Young right was caught out of position a couple of times but he was fast enough to recover the ball and stop the danger. The Englishman was active on the forward line also as he ended up providing Southampton with an early lead in the match after playing a beautiful one-two pass with Nathan Redmond at the 7th minute of the game.

Oriol Romeu (October 7): The Spanish midfielder was inch-perfect with his passes as they created some critical moments for Southampton. Romeo was active at the back as he made some strong interceptions and blocks to regain possession and control of the game in their favour.

James Ward-Prowse (7.5/10): The Veteran Captain of Southampton was sensational to control the game from the middle and provided some vital defensive support, making some strong blocks and interceptions. Prowse had a good passing accuracy which was shown in his effortless passes upfront.

Stuart Armstrong (October 8): The Scottish midfielder made his presence felt on the field as he chased and recovered balls quite and also followed it with some strong blocks in the box. Armstrong was actively present on the attack as well, providing some precise through ball for his teammates upfront.

Nathan Redmond (7.5/10): The English winger was excellent with the ball on his feet as he made some strong attacking plays and also helped Southampton to gain the early lead in the match by providing the assist to Peters at the 7th minute of the game.

Armando Borja (October 6): The Albanian striker was fast upfront on the pitch as he was able to create some considerable danger for Man City however failing to provide the very important and vital goal in the match. Borja could have been much better to position himself to grab the winning goal.

Adams jar (October 6): The Scottish forward was not able to create much offensively in the game even though he provided some good passes for attacks. However, Adams was strong at the back to intercept and clear the ball at vital stages.

Mohamed Elyounoussi (October 6): The Norwegian forward helped Southampton more at the back as he was quick to recover balls with his fresh legs. Elyounoussi was quick to move in with the ball in the frontline even though he failed to come up with the final product.

Lanco (6.5/10): The Brazilian center back was a great substitute for Southampton as he provided some strong defensive support with his blocks and clearances helping the Saints to earn at least a point from this tough fixture.

Ederson (6.5/10): Pulled off a couple of stunning saves early on in the second half, to keep City in the game. The Brazilian could not have done much for the goal City conceded.

Aymeric Laporte (7/10): The Spaniard scored from a brilliant headed finish to put City level on the scoresheet. Did well defensively, whenever Southampton made counterattacks.

Ruben Dias (6/10): Dias did not have much to do defend throughout the match. The Portuguese center back, however, showed his aerial presence while dealing with long balls inside his half.

Kyle Walker (6.5/10): Spent the majority of the match very high up the field. He was good with his ground passes but needs to work on his crosses which weren’t up to the mark.

Joao Cancelo (6.5/10): Like his partner down the other flank, he too spent most of his time inside the Southampton half. He looked more threatening runs in attack with his incisive and combinations with Grealish.

Rodri (7/10): Hardly had any defend to do throughout the match. The Spaniard struck the crossbar with a vicious strike and was decent in possession.

Kevin De Bruyne (7.5/10): Another exquisite display from the Belgian midfielder. Marked his authority on the game with the assist for the equalizer, putting a pinpoint cross into the box from a free-kick.

Bernardo Silva (7/10): A flawless display from the Portuguese midfielder, who put in a real shift in midfield. His dribbles were a treat to watch, and he linked up nicely with Walker down the right flank.

Phil Foden (7/10): The youngster tirelessly continued to make runs in behind the Southampton defenders whenever provided the chance. He had 3 shots on goal.

Jack Grealish (7/10): Grealish looked lively down the left flank, but could not make any notable impact on the game. He changed his positions frequently on the pitch, City fluidity in attack.

Raheem Sterling (6/10): Missed a sitter in the first half, failing to score from about 3 yards out from goal. Apart from that, his runs did not have much of an impact. He was taken off at the hour mark.

Gabriel Jesus (6.5/10): Jesus came on to replace Sterling for the final half-hour. He struck the crossbar immediately and added a different dimension to City’s attacking play.

Exclusive: Fabrizio Romano makes Salah and Ronaldo claim as he shares his frustration at the Ballon d’Or leaderboard