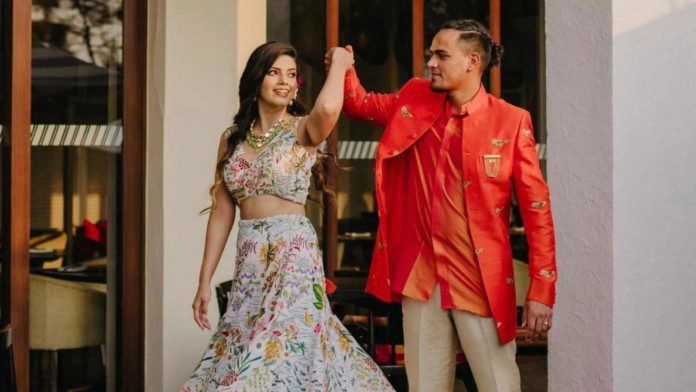 Rahul Chahar got engaged to his longtime girlfriend Ishani Johar in 2019 at the age of 20. Ishani is a fashion designer from Bengaluru. The duo will tie the knot on March 9 at a wedding in Goa on Wednesday. Their reception ceremony will take place on Saturday March 12th at the Radisson Hotel in Agra.

“Soon to be the beginning of our “eternal”! Day 1 filled with the colors of Mehndi. Love blooms!!” Chahar wrote on his Instagram post.

The lovebirds have been together since they were teenagers. After three years of dating, they got engaged in 2019.

With Rahul’s family having started wedding preparations in Goa, big faces of Indian cricket as well as Mumbai Indians and other IPL players will attend Rahul’s wedding. Deepak Chahar will also attend the wedding. Rahul Chahar and Glenn Maxwell are the two players set to marry ahead of the 2022 IPL.

Nita Ambani, wife of Mukesh Ambani, is the owner of the Mumbai Indians franchise, for which Rahul previously represented for five seasons. His performance in this franchise brought him into the limelight. There is speculation that Neeta Ambani will attend Rahul’s wedding.

The leg spinner is the cousin of Team India and Chennai Super King all-rounder Deepak Chahar. Agra-based 22-year-old Chahar made his IPL debut in 2017 representing the Rising Pune Supergiants. Since then he has been a part of the Mumbai Indians.

Overall, he sacked 43 wickets in 42 matches in the IPL. He also made his international debut for the Indian cricket team in August 2019. At the recent mega auction he was sold to the Punjab Kings with captain Mayank Agarwal at a price of Rs 5.25 crore.

How to get the cute emote in Lost Ark