Before fans can be brought back into the lives of the Bridgerton family on Netflix’s “Bridgerton” Part 2a dating show themed about the regency era is coming to NBC.

“The Courtship, formerly known as “Pride & Prejudice: Experimenting in Romance,” will premiere on Sunday, March 6 at 8 p.m. ET on NBC. It will continue on Sunday in the same time slot and stream on Peacock the next day. The show was originally set up as an original series by Peacock, but will now air on NBC first.

If you missed the announcement for this the first time, here’s the long line: “A heroine looking for her duke will sign up for the ultimate social experiment in romance. Transported to Regency-style England, a group of qualified hopefuls will have to win the heart of our heroine and her court. Set in a castle in the countryside, set against a backdrop of beautiful rolling hills, the heroine and her suitors will experience that dreams come true. From horseback riding and lake boating to archery and handwriting to communicate, they’ll be immersed in a time travel journey in search of love. Ultimately, our heroine and her suitors will discover whether the romantic experience ultimately finds their true love.” 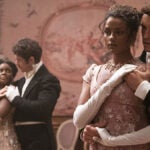 Obviously this show will be reminiscent of Daphne Bridgerton and the Duke of Hastings’ initial fake courtship in “Bridgerton” Season 1 that blossomed in love, or of Darcy and Elizabeth Bennet in “Pride & Prejudice.” .

“The Courtship” was filmed last summer and early autumn in the North of England, near York.

The show was ordered for Peacock last summer.

“Emma Raducanu reaching the third round at the Australian Open will be a success for her,” says former British tennis player Johanna Konta »FirstSportz

Back to Raptors On The Road.