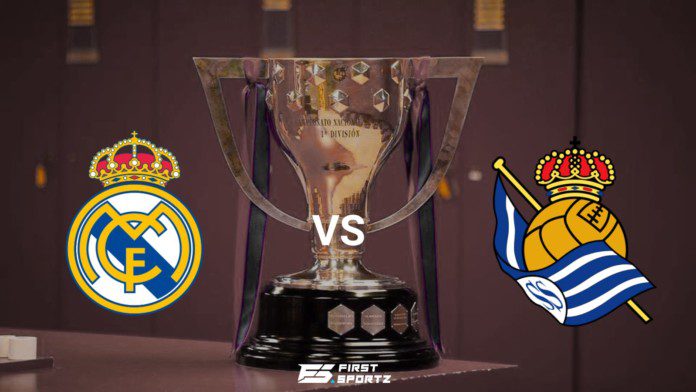 Thibaut Courtois (6.4/10): After conceding the first goal, the Belgian didn’t have much to do in the early stages. Maintained some high balls well.
Ferland Mendy (6.8/10): Seen a lot of ball possession. Long balls were perfect. Was adventurous with overlaps.
David Alaba (6.5/10): Decent game for the central defender. Some good blocks to his name. A good chance created.
Eder Militaoo (6.4/10): Saw a bit off pace today. Saw a lot of the ball. Committed a few fouls.
Daniel Carvajal (7.4/10): Missed a penalty due to a foul in the penalty area within the first 10 minutes of the game. Made some notable tackles throughout the game. Crosses were good. Get help.

Casemiro (7.8/10): The CDM won every 50-50 duel in the middle of the park. Blocked some important shots. The ball distribution was good.
Camavinga (7.7/10): Very ball-safe. Scored an absolute scorcher to equalize for his team.
Luke Modric (8.3/10): Got the assist for the first goal. He scored a great goal to give his team the lead. Very elegant on the ball.
Rodrygo (7.3/10): He dribbled well over the wings. Had some good tries and looked very bright on some games.
Karim Benzema (8.2/10): His team created some great chances. Didn’t have a shot on goal in the first half. Received the assist for Modric’s goal. scored the third goal for his team.
Vinicius Jr. (7.2/10): He created many good chances with his electrifying speed down the wings. Won a penalty in the second half.

Substitutions:
Asensi (7.4/10): Scored a goal after being substituted on. Good workmanship.
Daniel Ceballos: N / A
marcelo: N / A
Mariano Diaz: N / A
Luke Vasquez: N / A

Alex Remir (6.4/10): Not a good evening for the Real Sociedad goalkeeper. Conceded two long-range goals in the first half. The positioning was questionable.
Joseba Zaldua (6.3/10): Didn’t see much of the ball. Has been fouled a few times. Good long balls delivered. Got the yellow card.
Jon Pacheco Dozagarat (6.7/10): The central defender made a number of crucial clarifications. Could have closed players better. substituted at halftime.
Robin Le Normand (6.6/10): Decent game. Made some important tackles. Blocked some shots.
Asier Illaramendi (6.8/10): The captain passed the ball well. Did the defense work well as he made some blocks and interceptions.
Andoni Gorosabel (5.8/10): Can be dribbled over very easily at times. Had trouble dealing with Real Madrid’s wing threat. Dome distances made.

Igor Zubeldia (6.2/10): Eliminated some threats to his team. There was hardly any overlap. Also caught some balls.
Mikel Merino (6.4/10): Was average against Real’s elite midfield. The killer pass to the front was missing. Good job performance.
David Silva (6.9/10): Received the penalty for his team with his fast feet in the penalty area. Looked a little nervous on the ball. substituted at halftime.
Alexander Isak (6.8/10): Didn’t have a single shot attempt in the first hour of play. Tried his best to do something by drifting to the wings and sometimes dropping low. Couldn’t do much.
Mikel Ojarzabal (6.4/10): Goal from the spot to lead his team. Otherwise had very little engagement in the first half of the game.

New England is eyeing the trade to upgrade at wide receiver

Bloodborne Kart is now not only real, it also looks fantastic

“It’s worst when you have teammate drama,” Joey Logano on the Kyle Larson and Chase Elliott saga » FirstSportz