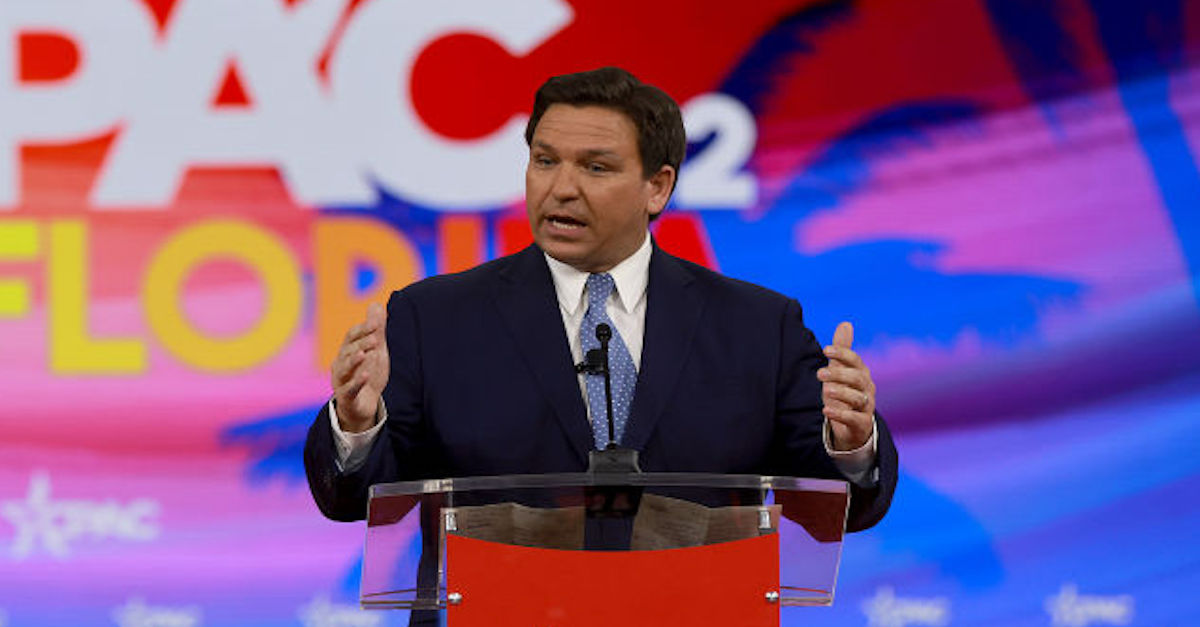 The complaint was filed Thursday by the law firm of Kaplan, Hecker and Fink on behalf of a group of plaintiffs that includes Florida students, parents, a teacher and advocacy groups led by the nonprofit Equality Florida. DeSantis is named as a defendant along with several Florida education officials.

The lawsuit alleges violations of due process and equal protection and violations of the right to free speech under the First Amendment.

The filing comes just days after DeSantis enacted House Bill 1557. Referring to the law as the Parents’ Rights in Education Bill, DeSantis praised the legislation as a way “to stand up for the rights of parents and the fundamental role they play in the upbringing of their children”.

the law specifically prohibits “classroom discussions about sexual orientation or gender identity at certain grade levels or in a certain way” and says that “[c]Classroom teaching by school staff or third parties on sexual orientation or gender identity must not be provided in kindergarten through 3rd grade or in a manner that is not age or developmentally appropriate for the students according to government standards.”

Those restrictions, the lawsuit says, along with the law’s enforcement mechanism, which allows any parent to file a lawsuit over classes they suspect violate the law, will have a drastic deterrent effect on students, teachers and parents .

The complaint raises numerous questions about how the law will affect discussions about LGBTQ+ issues in schools and school-related functions.

To understand how this dynamic will unfold in practice, consider how students, teachers, parents, guests, and school staff might address these common questions: During a class debate about civics, can a student with two gay parents talk about his talk family? Can this student draw a family portrait in art class? Can a lesbian student refer to her own coming-out experience while responding to a work of literature? Can a transgender student talk about their gender identity while studying civil rights in history class? What if this happens in the classroom or during an extracurricular activity with a faculty supervisor, or in an op-ed in the faculty-run student newspaper? Are teachers allowed to respond when students discuss these aspects of their identity or family life in class? If yes, what can you say? Do the same boundaries apply when a teacher intervenes when a student is being bullied or hit (or abused at home) because of their sexual orientation or gender identity? What if students address aspects of LGBTQ identity in essays that require teachers to provide grades and feedback? Speaking of which, can a history teacher educate their students on the history of LGBTQ rights? A state teacher can discuss Obergefell v. Hodges, 576 U.S. 644 (2015)? Can an English teacher note queer themes or plots – and can he assign books where any of the characters (or their families, or a supporting character) are LGBTQ? Does the librarian have to remove every book with LGBTQ characters or references? Put simply, can a gay or trans teacher put a family photo on their desk? Can they refer to themselves and their spouse (and their own children) with the correct pronouns? What do they do when a student’s parents of the same sex attend class together on Career Day or ask to go on a field trip? Are these parents barred from speaking to the class on the theory that their mere presence somehow educates students about “sexual orientation”?

“One might even ask: Would it violate HB 1557 for a teacher to argue with his students? this very lawsuit and the public controversy surrounding HB 1557?” the lawsuit adds. “In the plain language of the law, the answer could well be ‘yes.'”

“With the passage of HB 1557, Florida not only took a huge step backwards, but also did so at the expense of our children, the most vulnerable members of society.” Robert Kaplan said in a statement. “It’s hard to imagine our constitutional system being more offensive than treating a group of schoolchildren as second-rate simply because of who they are or who their parents are. This law must not stand.”

The coalition wants a federal judge to block the law and award them punitive damages.

The DeSantis office did not immediately respond to Law&Crime’s request for comment.

You can read the complaint about the law firm of Kaplan, Hecker and Fink below.

https://lawandcrime.com/high-profile/florida-parents-students-sue-ron-desantis-over-newly-signed-dont-say-gay-bill-designed-to-stigmatize-silence-and-erase-lgbtq-people/ Parents and students are suing DeSantis over the Don’t Say Gay Act.