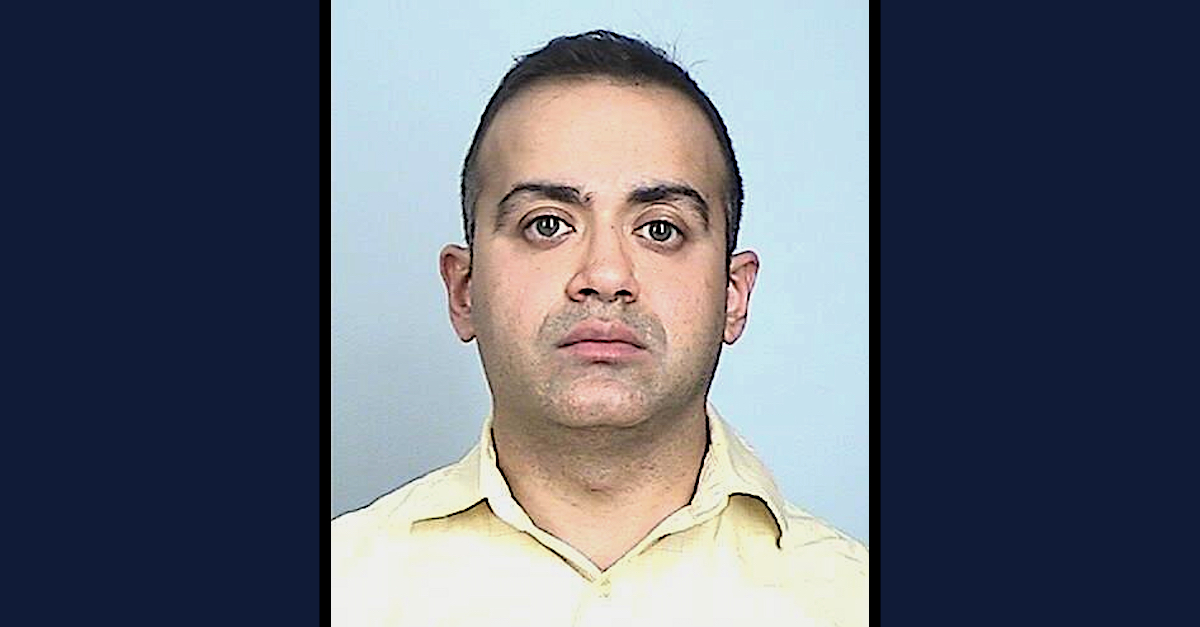 A Minneapolis man was sentenced to 15 months in federal prison earlier this week for engaging in non-consensual and abusive sexual contact with a minor on an airplane out of Boston in April 2019.

Neeraj Chopra, 41, was sentenced to 15 months in prison by U.S. District Judge Nancy E. Brasel on Thursday. After originally being charged with two additional transportation-related crimes, the defendant was only found guilty on the one abusive sexual conduct charge and sentenced in line with a request from federal prosecutors.

According to the brief, one-page indictment obtained by Law&Crime, Chopra violated a sex crime statute on a Jet Blue flight on April 8, 2019 “by touching” a 16-year-old victim’s “groin over clothing.”

A sentencing memorandum filed by the Minnesota U.S. Attorney’s Office sheds additional light on the circumstances of the incident

“During the second leg of the trip home from a hockey tournament in Buffalo, New York attended by numerous family members, N.F. took his window seat on Jet Blue Flight 1735 from Boston to Minneapolis,” the memo says. “Chopra was seated in the middle seat next to N.F., and another passenger was initially seated in the aisle seat next to Chopra, though that passenger left his seat during the flight and did not return. Chopra did not initially move to the empty seat.”

The defendant quickly took advantage of the situation by getting a blanket out of his backpack and draping it “over his lap” as well as over “a portion of N.F.’s right leg,” according to the sentencing memo, which recounts the evidence shown and found to have been correct at trial.

“With his arm under the blanket, Chopra placed his hand on N.F.’s right knee,” the memo goes on. N.F. moved closer to the window and asked Chopra to move over, stating words to the effect of ‘do you mind?’ Chopra apologized and removed his hand from N.F.’s knee.”

But that wasn’t nearly the end of it.

After taking out his tablet, the defendant initiated his victim in conversation, bringing up his background in IT, showing the boy things on the screen, “including photos of himself and his friends partying.” He also asked the boy if he wanted to “hang out sometime.” Apparently wise to the much-older man’s designs, the victim explained “that he was a junior in high school” and, when pressed by the defendant to hang out, entered a fake name and phone number into Chopra’s cellular phone.

Still, Chopra was not content to leave the teen alone.

“Later in the flight, Chopra put his tray table down and his head on the tray table as if he was sleeping; the blanket was still on Chopra’s lap and N.F.’s leg,” the memo continues. “With his left arm under the blanket, Chopra again put his hand on N.F.’s right knee and moved his hand around on N.F.’s knee and inner thigh. Afraid and uncomfortable, N.F. tried tapping his brother C.F., who was seated directly in front of him, but C.F. was sleeping and did not respond. N.F. attempted to move away from Chopra and asked him to move. Chopra removed his hand a second time, apologized and claimed he must have fallen asleep.”

The reprieve, however, didn’t last for long; things eventually became unbearable for the victim. From the filing at length:

Chopra returned his head to the tray table and again touched N.F.’s leg and inner thigh with his hand and arm under the blanket. Unable to get his brother’s attention, N.F. took three photographs of Chopra’s hand and arm on N.F.’s right leg partially covered by the blanket.  Taken over a 10-to-15-minute period, the photographs show Chopra’s increasing encroachment on N.F.’s personal space. Chopra’s hand and arm move first from the side of N.F.’s right leg closest to Chopra, then to the top of N.F.’s leg, and eventually to N.F.’s inner right thigh and groin area. The final photo, Government Exhibit 2d, shows N.F.’s right leg entirely covered by Chopra’s left arm and Chopra’s elbow resting atop N.F.’s groin area. N.F. became so uncomfortable with Chopra’s touching that he began to cry.

When C.F. eventually responded to N.F.’s attempts to get his attention, he turned around to see that N.F. was in distress. In fact, C.F. testified that he had never seen that look on his brother’s face before. C.F. then summoned a flight attendant and asked her to check on Chopra. The flight attendant testified that she did not have to wake Chopra, who immediately raised his head and responded affirmatively when she asked him if he was okay. N.F. testified that as Chopra was raising his head from the tray table to respond to the flight attendant, Chopra ran his hand along N.F.’s inner thigh and up over his penis before removing his hand from N.F.’s leg.

After that, the older brother contacted his father and said there was a problem. The boys’ father switched seats with his youngest son. Chopra, when asked by the older brother, finally moved to the long-empty seat next to him.

Law enforcement met the defendant at the gate, who admitted to touching the boy inappropriately, but said it was because he was asleep and having a bad dream “about a family member being killed.” That same story was repeated during trial and rejected by a Minnesota jury.

"Not again!" Disguised Toast gets horribly spawn camped by a Pokémon » FirstSportz

“That’s you?” The White House hits back at critics of student loan debt relief and calls on Georgia Republicans who have received thousands in PPP loans