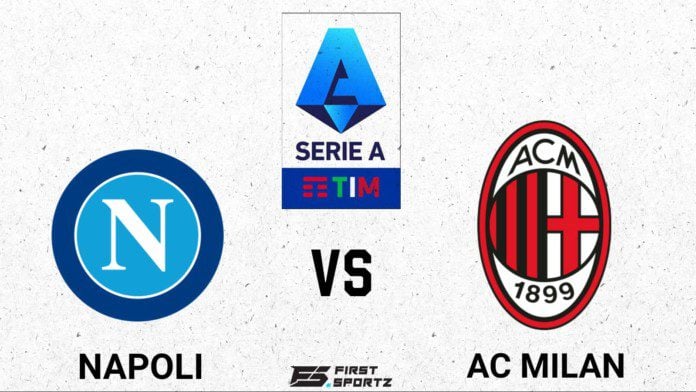 Napoli-AC Milan: It was a top-of-the-table duel in Serie A as second-placed Napoli met third-placed AC Milan. Milan secured the 3 points and went on top thanks to a Giroud goal in the 49th minute.

It was an even game with both teams having chances but Milan prevailed after Giroud deflected the ball into the net after a missed shot. Napoli must be disappointed, especially after seeing more of the ball and failing to capitalize.

Let’s take a look at the player ratings for the Napoli vs. AC Milan game:-

David Ospina (5.5/10): Made some easy saves from outside the box and made some good saves too.

Amir Rrahmani (6.8/10): The Napoli defender did well in most situations but couldn’t prevent the goal.

Kalidou Koulibaly (6.9/10): Made some key interceptions and tackles but couldn’t keep a clean sheet.

Giovanni Di Lorenzo (7.2/10): Looked promising with his passing and attacking drive and made some good passes in the last third.

Mario Rui (6/10): Had a weak game and was not dangerous offensively.

Fabian Ruiz (6.5/10): Did well in midfield and played some good long balls but failed to create anything for his side.

S Lobotka (6.8/10): The midfielder was better with his passing game and did well in midfield.

Matteo Politano (6/10): Lost possession a few times and was also disappointing with his crosses. Was substituted in the 67th minute.

Piotr Zielinski (5.9/10): Failed to create chances for his team and went missing during patches of the game.

Lorenzo Insignia (6.2/10): Insigne could not influence the game as usual and lost the ball in some situations.

Victor Osimhen (6.8/10): Had a game with not much service for him. He also created a few chances.

Elif Elmas (6.5/10): Was good with his pass after coming on but couldn’t bring the advantage needed.

Adam Ounas (7/10): Did well after coming on and changed the game well with his long balls.

Dries Mertens (6.2/10): Hardly got on the ball after being substituted on.

Theo Hernández (7.5/10): Milan player Hernandez was dangerous from the left back and created good chances. He also did a good job defensively.

Pierre Kalulu (6.8/10): Had decent play in defense and made some good tackles.

Fikayo Tomori (7/10): Tomori did well to hold the defensive line and not lose goals.

Davide Calabria (6.6/10): Calabria assisted Giroud’s goal and tried to score with a low shot but was otherwise calm.

Ismaël Bennacer (6.8/10): Bennacer played well in midfield and won a lot of tackles in the middle of the park.

Sandro Tonali (6.5/10): Tonali stayed calm for most of the game but made his contribution well.

Rafael Leao (7/10): Leão kept trying to dribble past the opponent and got it right a few times. He had a decent game and tried to prepare Giroud.

Frank Kessie (6.3/10): Kessie made some progressive passes. He made a few shots but was blocked.

Junior Messiah (6.5/10): Looked lackluster and lost a lot of tackles and 50-50s, often losing possession but making some good passes.

Olivier Giroud (7/10): Giroud was a spectator for most of the game but did well deflecting the ball into the net to score the goal.

Ante Rebic (6.4/10): The substitute had a quiet game after being substituted on.

Bike Krunic (6.6/10): Little of the ball after coming on, but created a chance with a good pass.

https://firstsportz.com/napoli-vs-ac-milan-player-ratings/ Napoli vs AC Milan Player Ratings as Milan move to the top of the table after a 1-0 win. » FirstSportz

Maryland vs. Michigan State Prediction and Odds (Grab the Under in East Lansing)

“We’ve gone from dominating one or two players to being more unpredictable,” says Ashleigh Barty of the strong contemporary playing field in the women’s circus

How will the Mumbai Indians still make the playoffs? » FirstSportz