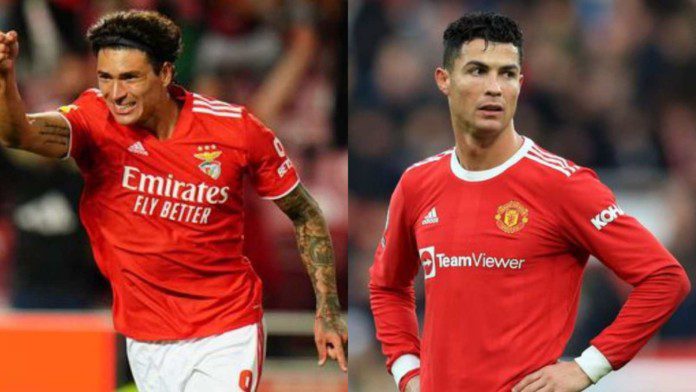 After a terrible season at Old Trafford, Manchester United could consider replacing Cristiano Ronaldo next season under Eric Ten Hag’s tenure as head coach. Manchester United hierarchies have started searching for a potential striker with Ronaldo and Cavani’s futures in doubt. They have a potential Lisbon striker on their hotlist as Portugal has always been a hub for potential stars.

Manchester United scouts were present at Tuesday’s Champions League match between Liverpool and Benfica. They were present to continue talks with Darwin Nunez about a possible move to the Red Devils. Nunez could well follow in the footsteps of Ronaldo and Cavani at Old Trafford.

In conversation with BT sportFormer England footballer Michael Owen also praised the Benefica star, claiming he is “really fast and in great shape”.

“He’s in great shape to start with. These days, if you want to be the sole leader, you have to have a real presence, and he has. He’s big, he’s good in the air and he’s fast too. He’s deceptively fast. Only 22 years old.” said Owen.

The young Uruguay international may not know that clubs like Manchester United are excited to have him. In the Champions League round of 16, Benfica defeated Ajax with the help of a Darwin Nunez header that propelled them to the quarterfinals. Nunez also scored the only goal in Tuesday’s 3-1 defeat by Liverpool in the first leg of their Champions League quarter-finals.

Darwin Nunez has scored 21 goals in 23 games for Benfica this season. Ronaldo, Cavani and Rashford are all having tough times at Manchester United and releasing all the players will be difficult for management.

Nunez plays on the left wing which is the potential position for Marcus Rashford and Jadon Sancho. He could also start in the central forward position depending on who leaves Old Trafford at the end of the season.

How to get free coupons for Weapon Royale and Incubator in Free Fire MAX? » FirstSportz

Ahead of KCON 2022, 10 emerging K-pop groups you should know about