The pre-match headlines revolved around Steven Gerrard’s return to Anfield but it’s been a case of as usual for Liverpool: Mo Salah score and three points in the bank.

Heart in mouth is what he does when he slips on wet grass! Thankfully got away with that one and there’s no real first half movie beyond it.

Then he didn’t have much to do until the final stretch, when Ali decided to make it fun again: kick the ball at Matip, swipe the ball at Ings, just to get away with it all.

Some of his whip crosses were just awe-inspiring – but never was anyone able to pull the pass over the defense to finish them off. Really unlucky with a deflected shot at the end of the best move of the first half.

Lots of times there has been overlap and failure to get a pass for him, which inevitably sees a low, first-time ball and autographed touchdown for someone.

Did he misplace one foot here? There was no brand of Joel advancing in midfield until late in the game, but all of his defensive work was done in the right place, whether defensively combining or deep in to block to re-create. shadow processing.

No frills, aside from a couple of passes into the final third, but also very sure there were no tackles. 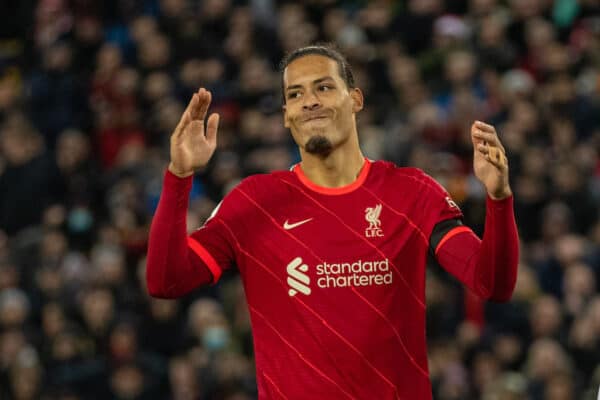 Got caught once early by Watkins who saw Big Virg booked, but the rest was pretty smooth and exceptional. Huge crosses, powerful defensive headers and an effort on goal blocked every angle.

When Villa finally organized attacks, it was Van Dijk, the repeater, who repeatedly headed and cleared the ball to keep a clean sheet.

Villa were completely tormented in the first half – maybe have a goal, an assist, win a penalty or all three. Tired of his speed and ability to beat Cash and serve.

The second half was not relentless with running into the final third, but he also stuck to his defensive plan, following Villa’s runs and blocking crosses all the time.

The relentless Andy Robbo is the best Andy Robbo!

From the first to the 75th, it was all very typical Fab: clearing every bit, making clearances, winning tackles and playing smart.

But from 75 on, you’ve seen why he’s the best: pick those spots in and around the box to block things out. Crosses, shots, loose bouncing balls and everything else – Fabinho where there is space and danger if anyone else is playing.

Some good driving activities and nice links play down the channel sometimes. Continually running in both directions to keep Villa under pressure and constantly in the ears of the pros during wasted time.

In the second half he was by his side Fabinho to defend that onslaught, made a critical intercept and another key clearance, creating one of many late breakaway opportunities. Really good from the captain.

Another game, another clean sheet with this man on the team. Coincidence, no question!

Some excellent work in the first half and right after the restart to keep those pressure waves going – it seemed easy, but he picked the right ball every time to keep moving Villa around.

It wasn’t quite possible to get a few shots from long distance because he got too close too quickly. It was later.

Played right behind the front lines, attacking from deep inside is a diamond. There were his moments in the first half that transformed play and with a hit from the range, but didn’t participate as much as he would normally the No.

Several of his attempts failed to dribble, while more tackles blocked Villa’s tackles and restarted our own attacking play.

Probably a disappointment for him but more action on one of our form players.

Turn on and off in the first half, tick three times and then glide over people to open up space. Will definitely take part in the best movements and moments throughout.

Then Mo turned into Magic Mo when we needed him: free kick, penalty kick. Should have also added another three-on-one split, but chose to pass.

The game’s best player by distance in the first half. Along with Robbo, he’s unstoppable with quick dribbles, really good tempo changes and a couple of nice dribbles into the box.

A shot was blocked shortly after the restart and then another late cut appeared to be coming in before it was deflected.

Set up a three-in-one chance.

Diogo Jota (in for Oxlade-Chamberlain, 58′) – 5 – Could have scored with his first touch, almost scored after a short pass and some loose touch in defense just to add to the excitement. Had to score late. Miss two.

It’s really hard to fault Jurgen; the whole team was explosive, the performance was good, we should have won by two or three. However, he could not put the ball in the net.

Made the changes to ensure we kept a clean sheet and saw a one-goal win, didn’t let ‘Gardard occasion’ take precedence over points and certainly gave Stevie a lesson in level leadership is possible.

He’ll be pleased with the shutdown, no doubt – but let’s get that clinical advantage back.

Israel Adesanya to defend the UFC middleweight title against Robert Whittaker on Feb. 12

Aaron Judge’s latest contract update is putting him under pressure

The Yankees are red hot, but will their season become legendary?