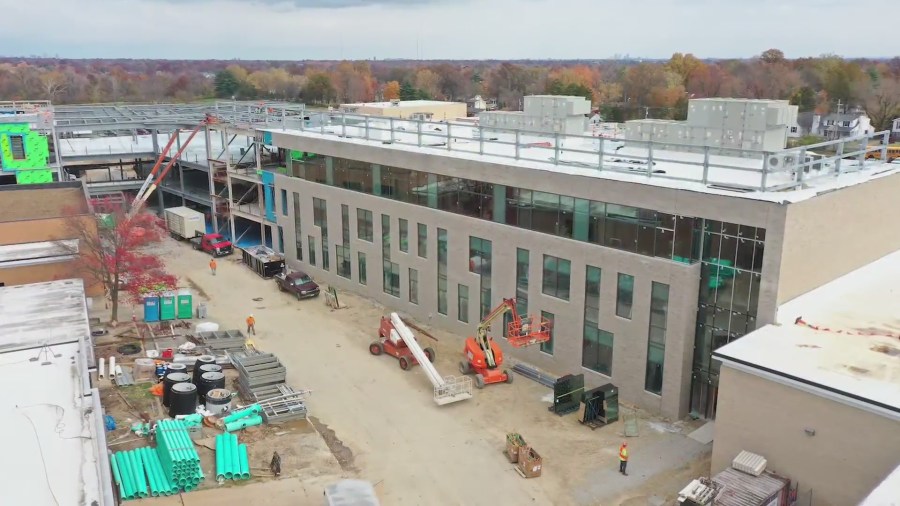 ST. LOUIS COUNTY, Mo. – A school in the St. Louis is undergoing a major transformation, with a focus on safety. The Lindbergh School District is using funds from the 2019 bonds to rebuild its high school, with the goal of making it one of the safest schools in the Midwest and across the county.

Built in the 1950s, the old high school is divided into five separate buildings, each built in its own way. Some buildings have holes in the stairs, leaks and electrical problems. Not only that, the buildings are also not secure with more than 50 different entry points on campus.

“If you don’t have a single point of entry where you can monitor traffic and people coming in and out of your campus — in this day and age — that’s a very important aspect,” said Academy Director , said Dr. Tony Lake.

Dr. Lake said safety in the new school was his top priority as he assumed the role of superintendent. The project was approved by the community three years ago following the passage of a $105 million tax-free bond.

“This has to be part of your DNA and it has to be at its peak because people are sending us their most precious possession every day. We have to make sure they’re taken care of,” Dr. Lake said.

The project follows a number of school shootings over the past decade, notably the shooting at Oxford High School, Michigan last year.

“The tragedy in Michigan, every time that happens, just breaks your heart. It’s something that you hope will never happen at your school,” said Dr.

“Obviously, it’s on your mind. Especially when doing drills you have to think where you are going? What will you do in those moments? Manaj added.

Phil Santore has dedicated his career to making buildings safer, after living just 12 miles from Sandy Hook when the shooting happened there. He is vice president and principal managing the security division of Ross & Baruzzini based in St. Louis, an engineering and architecture firm that specializes in planning, designing and consulting for a wide variety of facilities.

“But it doesn’t matter if it’s a student or a teacher a parent. All felt very, very emotional; very low. You feel helpless and in a way,” says Santore.

Since then, he has helped with the school’s remodeling.

“It was one of the most difficult projects for me emotionally, as well as from a show standpoint. We had to meet so many terrible criteria, so many parents – the whole world was watching,” said Santore.

The new design of Lindbergh High School combines the five old school buildings into one large building. It will feature new open common areas, open classrooms and hallways, a new gymnasium, and a new performance room. Although the building has transparent glass, Santore said, he still includes secure spaces to hide students from intruders.

“We removed the ‘you have to have a brick wall to be safe’ aspect, and that’s not really true. There are ways to keep students safe even in the presence of glass,” says Santore.

The school will also have security cameras and locks on all doors. Superintendent Dr. Lake says the biggest and most important feature is a large secure, bulletproof glass entrance.

“Our wonderful kids and families are probably going to the building, which is one of the safest and most creative places to learn, I would even say in the state of Missouri, maybe even the Midwest.” Lake said.

For freshman John Eckarich, that makes all the difference.

“It just makes people safer and more comfortable coming home,” says Eckarich. When you feel comfortable, you can learn better.

Santore says the best safety tool is taking mental health seriously and counseling students at all schools – to prevent any kind of tragic incident.

Trends: Illinois plans to end mask mandatory this month, but not all schools

“All the really bad things that are happening are really driven by mental disability issues. If we can start to recognize some of the potential problems that cause some harm, we’ll be in a much better place along the way,” said Santore.

Superintendent Lake agreed. “When you look at the tragedies across this country, it’s often caused by someone who doesn’t feel like they belong, or they’re disowned. So first we need to create a culture in our schools that ‘you belong, you are valuable, you matter and we want you here every day.’

The new school is scheduled to open in the fall of 2023.