The title tag that opens writer-director Krystin Ver Linden’s feature film debut says, “Inspired by real events,” and it could be argued that these words are more true in terms of fact. metaphor, even if you don’t know the movie concept before.

Keke Palmer stars as the female lead, a woman enslaved on a 19th-century Georgia plantation overseen by the evil Paul (Jonny Lee Miller). The first shot of the film shows her running for her life until she reaches an empty lot, at which point her face opens in shock and dismay, and she cries,” Is not!”

Ver Linden’s script for “Alice” is very carefully structured. We reminisce the word “No!” about her life on the plantation, given by cinematographer Alex Disenhof (“The Mosquito Coast” by Apple TV+) a unique kind of lavish visuals. We see a shot of Paul from the porch overseeing the captives, which gives us a sense of the density of the field they’re working in. Immediately, we felt the oppressiveness of the plantation, where even the moss on the trees looked like tassels intended to snare and trap. 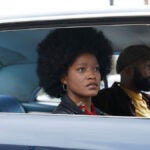 There is a scene of a cemetery where the dead among Alice’s people were buried. Ver Linden cuts a close-up of a dead bug on the ground and then shows us Paul’s foot stomping on it; What makes this shot so effective is the crunching sound of the beetle carcass beneath that foot. Ver Linden did not linger on the symbol or underline it. She sets it up, she makes it work, and she moves on.

We were held at the plantation with Alice for about 36 minutes of the show’s run, at which point the film replays her crying “No!” again after running away, and it was the perfect amount of screen time for the reveal Ver Linden had planned. She knows that we need to immerse ourselves enough in the unbearable world of plantations so that when Alice sees a car driving down the highway, the audience feels as relieved and shocked as it is for her. that.

Because Alice has run away from the plantation only to find out that it is 1973, and she is soon picked up in a van by a sympathetic guy named Frank (Common), who takes her to the hospital to be treated. examination. While there, Alice watched the proud, shameless face of Pam Grier on the cover of “Jet” magazine and Diana Ross on the cover of “Rolling Stone”. Palmer had a kind of beautiful slow wonder in the way Alice softly said, “Rolling Stone,” as if she were waking up from a nightmare and somehow entering a paradise-like dream.

Palmer has a tough role in “Alice” because she’s at the center of the movie, and she mostly has to play the part of pain and confusion without ever making it monotonous. Sure, she’s tempted in the second half of the film to soften her effects to give us some relief, but Palmer stays true to the Alice character as she was dramatized in the film. movie’s first. A sadist like Alice would not quickly adapt to freedom, or never forget how she lived.

Ver Linden never went the commercial route here with her lofty ideas. Like Palmer, she stays true to her goals but still gives audiences satisfying moments that call for applause, like when Alice switches to a stronger look and emerges with a full Afro. enough after being exposed to the example of Grier and Angela Davis. When Paul takes Alice to see Grier in “Coffy,” Alice instinctively understands something about the movie as she later says, “She isn’t real, is she? But what she believes in, what she is on her side.”

Ver Linden is trying to do a lot of things in this debut film. The only minor issue is that she sets up the character of Frank in a way that seems to call for a scene or two. His plot as a wounded revolutionary is strong enough for its own movie and Common provides such a steady and focused presence that the man he’s playing always seems real even when he is most needed as a plot device.

Another title card in the closing credits dedicates the film to African-Americans “still enslaved” in the 20th century — and that feels crippling, even after Ver Linden has shows us Alice taking direct inspiration from Pam Grier, in her own heartbreaking way, in the final scene of a movie that earns catharsis.

“Alice” opens in US theaters on March 18.

https://www.thewrap.com/alice-film-review-keke-palmer-common-2022/ Keke Palmer escapes slavery and embraces her inner self

Austin briefed Biden about options, including moving US troops to countries besides Ukraine