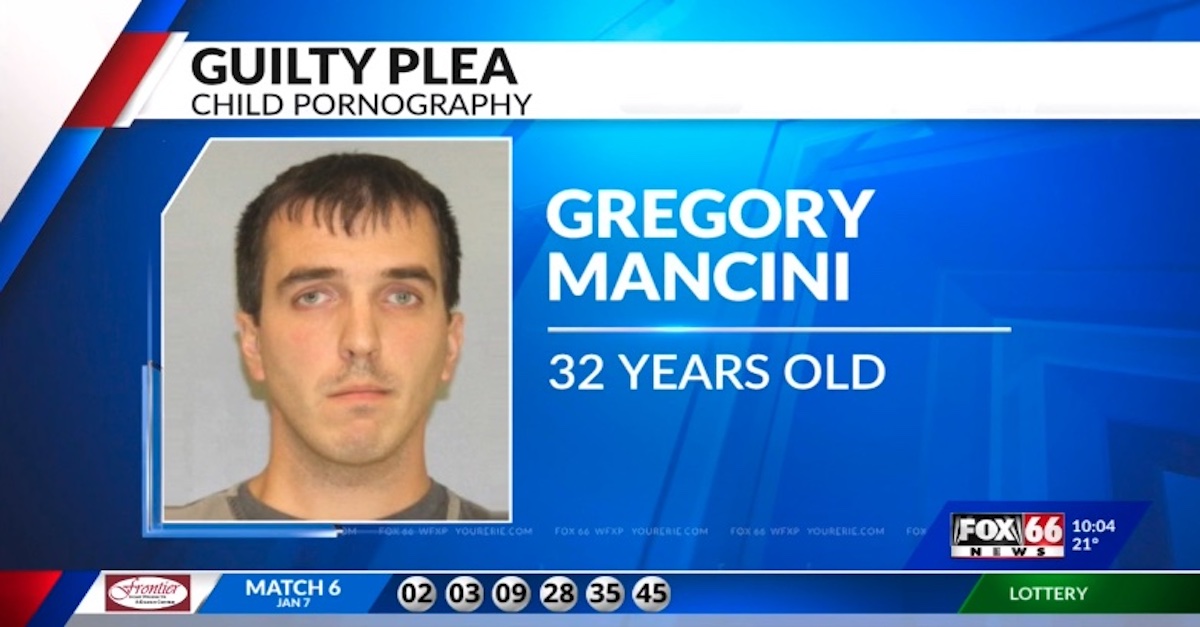 A former Pennsylvania teacher and high school basketball coach was sentenced to nearly 10 years in prison after pleading guilty in January 2022 to three counts of child sexual exploitation.

Gregory Samuel Mancini32, previously pleaded guilty before a US district judge Susan Paradise Baxter in the Western District of Pennsylvania, according to a Justice Department news release.

On Friday, the judge sentenced the Erie, Pa. resident to 114 months in prison (or 9.5 years) plus 15 years of supervised release.

Mancini was accused of crossing state lines and traveling all the way to Georgia to engage in “illegal sexual activity” with a 13-year-old boy he met while playing Fortnite online.

According to the DOJ, the Hall County Sheriff’s Office caught Mancini because the minor had alerted them that the offender had traveled to Georgia in November 2018. The victim was “excited” about Mancini’s plan.

“Upon questioning, Mancini admitted that he had engaged in sexual conversations with the underage victim and crossed the line. Mancini also admitted that he was a criminal,” the DOJ’s press release on the case said.

The federal government also said the defendant had sent incriminating messages to an undercover agent posing as the 13-year-old boy.

Those messages said, “I want you, I love you” and “I want to hug you…kiss you…love you.”

The government said two of Mancini’s computers and a USB stick were eventually seized as part of the January 2020 investigation.

“A forensic examination of these items uncovered hundreds of child sexual abuse footage showing children as young as two years old being raped and abused by adults,” the DOJ said. “Also uncovered was a diary Mancini had written in which he admitted he was attracted to younger boys.”

GoErie reported that Mancini had previously worked as a teacher at Barber National Institute. He was also an assistant junior basketball coach at Cathedral Prep, a private Catholic high school.

A court record entry notes that Mancini was ordered to pay $3,000 in damages and a $200 special assessment.

Court records show that the defendant’s brother wrote a letter in support of his family member. The letter said in part:

Greg has always and continues to show remorse for his crimes and understands that he has a problem that needs to be resolved before he can move on with his life. Because of that remorse on his part, I believe that if Greg imposes a sentence that focuses on comprehensive counseling with a minimal amount of time in a federal correctional facility, he will be able to overcome his problems and once again be a functioning member to join society again.

The defense included many other such letters as exhibits in Mancini’s sentencing memorandum.

“Mr. Mancini apologizes to the minor and the minor’s family for the fear, panic and harm caused by his actions. Mr. Mancini notes that the counseling he was able to attend prior to his detention gave him insight into his behavior and how or why it changed from lawful to unlawful — a change slow enough that he could not see the harm his actions were causing the minor,” the memo said. “Mr. Mancini, his family and support structure, along with his supervised release officer, will work to provide the resources needed to ensure Mr. Mancini never gets caught up in this harmful thought process again.”

“With new tools to help him manage his thoughts and actions, Mr. Mancini claims he is now able to recognize the bad thought patterns that trigger a rationalization of normality into abnormal and harmful behavior,” the documents add added.

Marisa Sarnoff contributed to this report.

What do Evidence do in The Quarry?