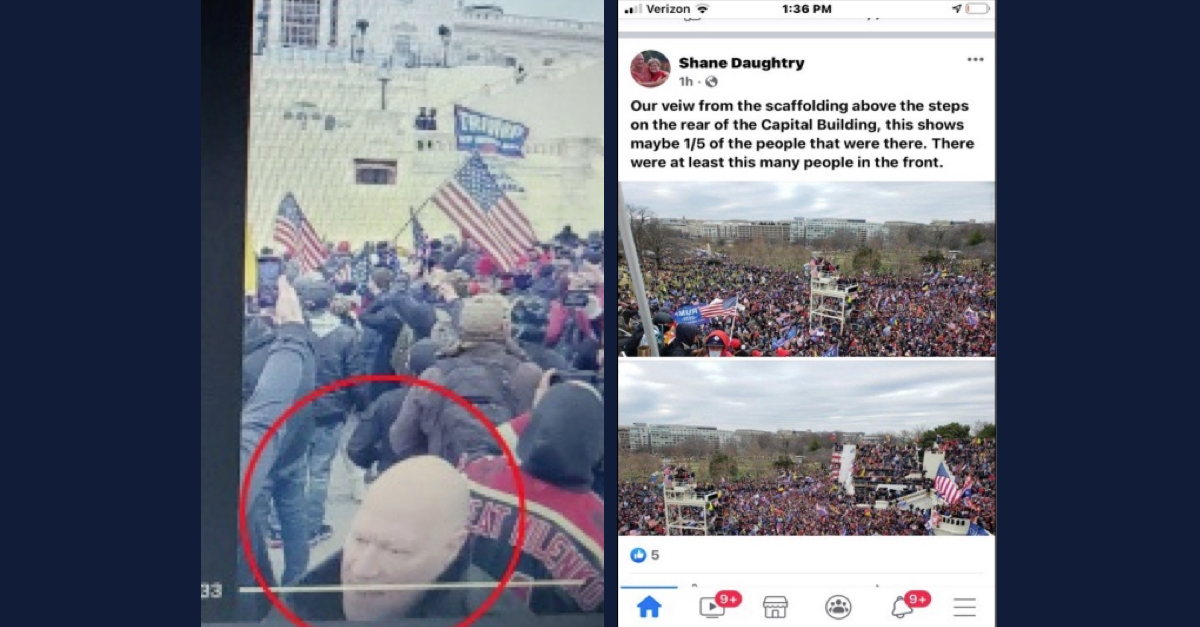 An ex-Georgia police officer whose presence at the January 6 riots in the US Capitol was reported to the FBI by a colleague has been sentenced to probation and house arrest.

Michael Shane DaughterryThe 60-year-old was sentenced to three years’ probation, including 60 days of house arrest, on Thursday. He had pleaded guilty in March to entering and remaining in a restricted building or compound, an offense punishable by up to a year in prison.

Prosecutors had asked for four months of house arrest in addition to probation; Daughtry had only applied for a suspended sentence.

As prosecutors found, Daughtry had previously posted several posts online Donald Trump’s so-called “Stop the Steal” rally on January 6, at which he appeared to express his feelings towards the Democrats.

“When they finally start putting some of these Democrats before the firing squad for treason, I hope they’ll let me serve on the firing squad… I’ll even bring my own ammunition!” he said in the Dec. 18 Post.

These posts, along with other posts that suggested his intention to go to Washington, prompted an officer at the Pelham Police Department — where Daughtry himself had worked in the early 2000s — to call Daughtry and record the conversation.

“A Pelham Police Department officer who saw Daughtry’s Facebook posts called Daughtry at approximately 4:24 p.m. on Jan. 6 and recorded their communications,” the DOJ said in its ruling. “In that conversation, Daughtry explained that he was in the Capitol that day and that he was one of the first to make his way through the barricades surrounding the perimeter. He admitted during the call that he went “as far as the Capitol door” but “had to back off” when police officers fired rubber bullets at him. Daughtry claimed, ‘We’re the ones who tore down that fence up there.’ He also claimed: “We were the first over the fence. Everyone followed us.”

Daughtry has not been charged with entering the Capitol himself, but he did admit to climbing scaffolding in the West Terrace area and snapping a picture of the growing crowd.

“Our view [sic] from the scaffolding over the steps at the back of the capital [sic] Building that shows maybe 1/5th of the people that were there,” Daughtry wrote in a caption over two pictures he posted on Jan. 7. “There were at least that many people up front.”

On the same day, Daughtry posted a misinformation-filled letter on Facebook, saying he “refused to leave the capital [sic] footsteps for several hours” and that the attack was staged by Capitol Police “to make us look bad”.

“I have never seen a Patriot cause harm or trouble,” the post reads. “The violence was all ANTIFA.”

At Thursday’s sentencing hearing, Daughtry told the US District Judge Randolph Moss that those weren’t exactly his words.

“That was a repost from someone who stayed at the motel with me,” Daughtry said. “When I got back to the motel that night, probably after midnight, I was downstairs in the lobby having coffee… I wasn’t friends with them, they asked me to post it, they sent it to me and I reposted it.”

Daughtry said a lot of what he’s posted online is outrage and shouldn’t be taken seriously.

“It’s mostly just exaggeration,” Daughtry said. “I’m not one of those people who believe in conspiracies and stuff, I never have. You can’t be a cop for 20 years and believe everything you hear.”

Moss pressed Daughtry further, asking if he believed the Antifa violence was carried out or staged.

“It could have been Antifa, it could have been anyone,” Daughtry said. “I’m not saying it was or wasn’t. I have no idea who it was. They’re now trying to get to the bottom of it, conducting hearings and going through the video to find out who did it.”

Federal officials have testified that there is no evidence that “fake” Trump supporters or Antifa were among the rioters in the Capitol that day.

Moss also dismisses Daughtry’s insistence that he saw police officers moving barricades near the Capitol grounds, saying he was “skeptical” of the idea and that it’s possible rioters in military gear were actually the ones who moved the barriers.

Moss told Daughtry that the judge’s final verdict was lighter than originally planned.

“My initial inclination was to seek a longer sentence, but I was persuaded by Mr Daughtry and [attorney Timothy Saviello]Moss said, referring to Daughtry’s sentencing note, in which he detailed his family history — including his father’s suicide and the death of his second wife — and his responsibility to his current girlfriend, who is struggling with medical issues. Moss.

moss, a Barack Obama appointment, also noted that Daughtry has already spent the 17 months since his arrest under restrictions that “were possibly stricter than what I would have imposed”.

Daughtry asked Moss to lift the restriction that he couldn’t have firearms in his home – a standard condition of parole in federal misdemeanor cases – saying he couldn’t find a job as a police officer while on parole and that his work as a gunsmith was the only one income would be. Moss, who granted the government’s request for a mental health assessment as part of the ruling, said he would reassess the firearms restriction afterwards.

Daughtry is also required to complete 60 hours of community service and, under his plea agreement, pay $500 in compensation for the estimated $2.7 million in damage to the Capitol.

UN to vote on gang handgun stall in Haiti