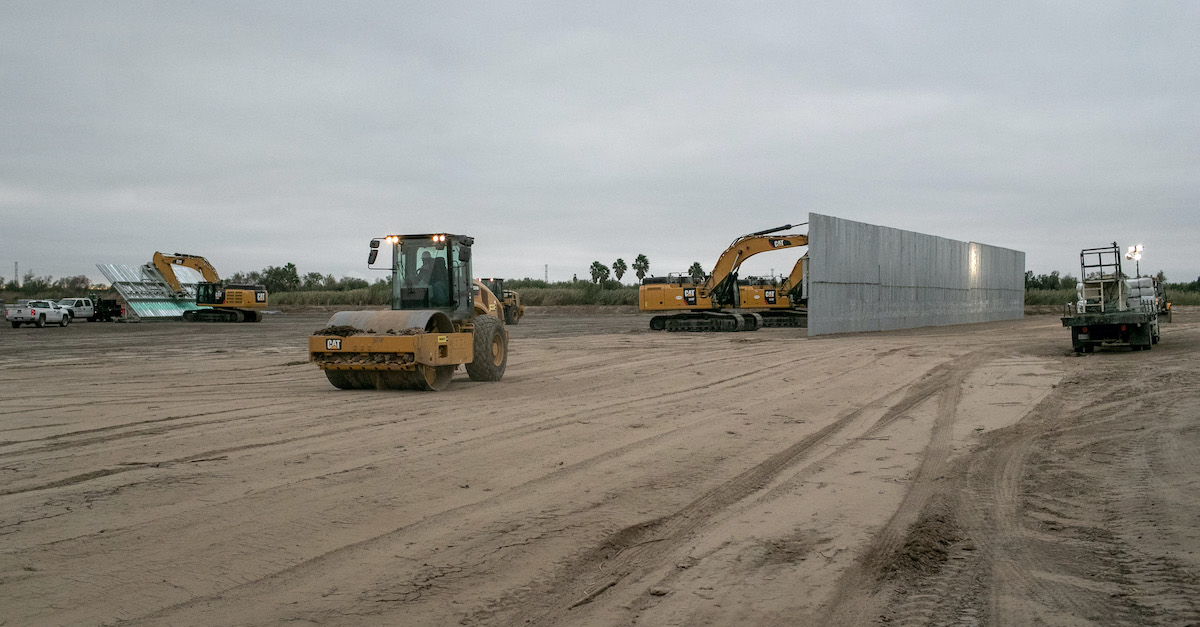 A construction roller levels land for a section of a privately constructed border wall near Mission, Texas December 11, 2019. Hard-line immigrant group We Build The Wall is funding the construction of the wall on private land along a stretch of the Rio Grande that forms the border with Mexico.

A federal judge dismissed the Justice Department’s lawsuit against a contractor who made billions under the former president Donald Trump’s Administration after the parties agreed to a settlement on undisclosed terms.

In late 2019, the federal government sued nonprofit group We Build the Wall and three other companies in a series of lawsuits over their controversial plan to erect barriers along the US-Mexico border. The latest wrinkle in this courtroom drama involves construction companies belonging to it Thomas Fisherwho reportedly received $2 billion in border wall contracts.

These companies, Fisher Industries and Fisher Sand and Gravel Co., entered into an agreement with a Texas landowner Lance Neuhaus to erect a 3-mile steel post fence on his property, but a neighboring conservation area claimed the bollard’s construction would devastate their property.

The US International Boundary and Water Commission (IBWC) argued that the disturbance would be international, altering the shoreline and potentially violating a US-Mexico water treaty that has been on the books for more than half a century.

On Tuesday, the Justice Department and the construction companies moved to dismiss the case under a secret settlement, and a federal judge quickly agreed.

It’s unclear if or how the concerns cited by federal authorities have been addressed.

Representatives from the Justice Department, IBWC and Fisher Industries did not respond to Law&Crime’s requests for comment.

The construction violated a 1970 U.S. water treaty with Mexico, according to the wildlife sanctuary adjacent to the construction, the National Butterfly Center. Regulators at the U.S. International Boundary and Water Commission made a similar argument in federal court in December 2019.

“As a result of the bollard fence project and the change to a ‘stranded’ shore, the shore of the Rio Grande has shifted, resulting in potential losses and/or territorial gains for the United States and Mexico,” reads the government’s amended complaint.

In early May, the Justice Department indicated that the parties were close to an agreement.

“Since the last status conference, the parties have resolved the remaining issues and agreed to a settlement of this case,” the Justice Department wrote on May 12. “In addition, permits were obtained from the responsible federal officials. Fisher defendants and the United States are in the process of completing the settlement documents and obtaining the required signatures pending the completion of the documents.”

Shortly after the Justice Department and Fisher filed a dismissal complaint, the US District Judge became Randy Crane agreed to close the case unconditionally, meaning it cannot be resubmitted. crane is on George W Bush Representative.

Although the case, now closed, was a civil suit, former executives associated with We Build the Wall have been prosecuted.

In New York, the executives of We Build the Wall Brian Kolfage, Steve Banon, Andrew Badolato and Timothy Shea were charged with alleged conspiracy to defraud donors and laundering their ill-gotten gains. Federal prosecutors in Florida separately accused Kolfage of having hidden funds from tax authorities.

Trump pardoned Bannon, his former chief strategist, in connection with the alleged plan, but the former president offered no clemency to his co-defendants. Two of them, Kolfage and Badolato, recently pleaded guilty to conspiracy to defraud donors. Shea decided to fight the charges in an ongoing trial.

We Build the Wall was quickly released from the Texas litigation as a civil defendant and was not a party to the settlement.

Neither Fisher Industries, Fisher Sand and Gravel, Neuhaus and Sons nor any person associated with these companies have been charged with any criminal wrongdoing. Neuhaus was dismissed from the civil proceedings as a defendant in May 2021.