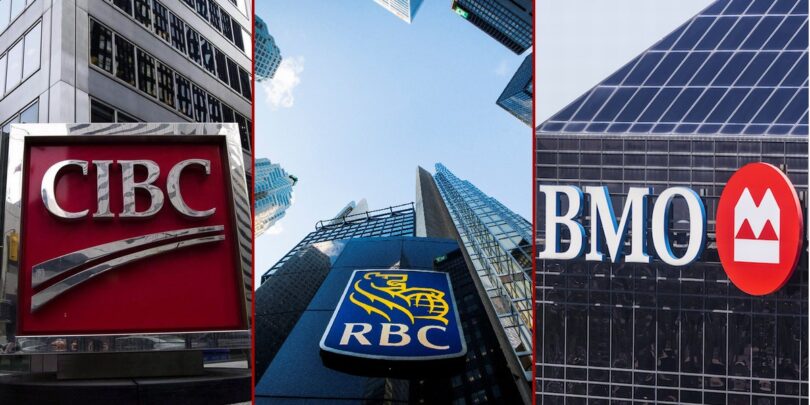 A number of Canada’s banks are now reported to be ‘offline’ amidst a political crisis caused by Prime Minister Trudeau’s reprisals on the peaceful Freedom Convoy protest.

🚨Canada’s largest banks are all offline.

Did Trudeau try to hack into their databases?

Did the U.S. hack them first, to stop it?

What could cause all three to crash on the same day — hours after Trudeau’s expropriation order?

“Did Trudeau try to hack into their databases?” Levant asked. “Did the U.S. hack them first, to stop it? What could cause all three to crash on the same day — hours after Trudeau’s expropriation order?”

TD Canada Trust and Scotiabank were also reported to be “offline.”

BANK Outages at all big 5 banks!
It’s happening.
Trudeau has crushed consumer confidence in the banks in less than 48 hours. Some ATMs are still allowing cash to be pulled out but going empty.
The bank has now locked up EVERYONES funds!
🇨🇦 🔔 pic.twitter.com/9CslynYJjD

There had been recent chatter by Freedom Convoy protesters that a “run on the banks” might be a potential economic reprisal against the Canadian government.

On Tuesday, Trudeau announced that he would be invoking the Emergencies Act, formerly known as the War Measures Act, an action  tantamount to declaring martial law.

Trudeau claimed that the scope of the measures would be “time-limited”, “reasonable and proportionate.” He also repeated his claim that the military would not be deployed. Under the Emergencies Act, which is yet to be approved by parliament, banks can freeze the personal accounts of anyone linked with the Freedom Convoy protests.

“This is about following the money. This is about stopping the financing of these illegal blockades,” Canadian Deputy Prime Minister Chrystia Freeland said at a press conference on Monday.

“We are today serving notice if your truck is being used in these illegal blockades, your corporate accounts will be frozen. The insurance on your vehicle will be suspended,” she continued, adding that personal financial accounts would be included in the order.

The AP reported on Wednesday that the Freedom Convoy had peacefully lifted the last economic blockade amid major concessions on Covid restrictions from five provinces: Ontario, Quebec, Alberta, Saskatchewan, and Prince Edward Island.

After raising over $9 million for the Freedom Convoy movement and having their funds blocked and even seized by private banks, Christian crowdsourcing platform GiveSendGo was recently hacked and taken offline.

Now, we know the face of the hacker, who is openly bragging about the hack and leaking the personal information of those who donated (statement of transparency: the writer also donated to the peaceful protest).

@gofundme
Your client Aubrey Cottle is on TikTok bragging about hacking your competitor @GiveSendGo
Cyber attack is of course,a criminal offense.
Your stated policy is to NOT fund criminal activity
Yet you’re actively allowing him to use your crowdfunding services.
Explain this pic.twitter.com/Wq5Wzi8tgw

The hackers reportedly leaked personal information of those who donated to the Freedom Convoy.

An S3 bucket run by GiveSendGo was found to be leaking pics of drivers licenses, military IDs, passports, & other sensitive docs just days ago.

Source tells me that despite an attempted fix, the bucket was exploited again to allow the takeover of the site https://t.co/2cnPIGMkuo

The site was hacked and a video was put in its place with a hateful message for those who are standing up for their rights.

The hackers also published an expletive-laden screed against “givesendgo grifters and hatriots.” There are also reports they are releasing the personal information of the donors.

GiveSendGo appears to have fixed the issue that redirected visitors to a website set up by hackers.

The hackers’ domain at GiveSendGone[.]wtf also appears to be down.

On Tuesday, GiveSendGo was hit with a massive DDOS attack that locked up the server momentarily.

“GoFundMe’s rival GiveSendGo claims it was a victim of “heavy DDoS and bot attacks” on Friday, leading to server downtime as soon as the site started raising cash for the Canadian trucker convoy,” HackRead reported. “According to the website despite technical glitches, the Christian fundraising platform raised more than $1.35 million within 12 hours.”

“We have been under heavy DDOS and bot attacks,” GiveSendGo said at the time. “In spite of all of this, we still have managed to raise funds 5X faster than the gfm did. GFM raised 10mil in 3 weeks. GSG campaign has already raised over 1.1mil in just over 12 hours!”

This isn’t the first time that GiveSendGo was “hacked.” It was also attacked due its fundraising for Kyle Rittenhouse’s legal defense.

Heather Wilson and Jacob Wells, the co-founders of GiveSendGo, made a statement in April confirming that their website was hacked:

“This was not a database breach as characterized, just a frontend attack where a hacker was able to collect email addresses of donors. We have since found and addressed the issue and are scanning the website with outside security auditors to ensure this does not happen again. Aside from emails and names, no financial information is collected from donors by GiveSendGo so there was never any danger of donors’ credit card information being compromised.”

15MB of private information was dumped in the earlier hack.

“Donor information for every campaign on the ‘Christian fundraising platform’ GiveSendGo… The dataset is broken down by campaign and includes name, donation amount, comments and email address,” a hacking websites notes. “While ‘anonymous’ donations do not include names, they do include the donor’s email addresses.”

GiveSendGo recently responded to reports that its funds were “frozen.”

“Please push this out there: The funds from the Freedom Convoy are not frozen contrary to what you might be hearing on the news,” the crowdsourcing platform said on Twitter. “GiveSendGo is working with many different campaign organizers to find the most effective legal ways to continue funds flowing.”

Know this! Canada has absolutely ZERO jurisdiction over how we manage our funds here at GiveSendGo. All funds for EVERY campaign on GiveSendGo flow directly to the recipients of those campaigns, not least of which is The Freedom Convoy campaign.

“Know this! Canada has absolutely ZERO jurisdiction over how we manage our funds here at GiveSendGo,” the company wrote. “All funds for EVERY campaign on GiveSendGo flow directly to the recipients of those campaigns, not least of which is The Freedom Convoy campaign.”

GiveSendGo also recently poked fun at the Canadian government over the action.

GiveSendGo, based out of Delaware, is not subject to Canadian jurisdiction. However, the company is responding to a court order that aims to freeze access to funding the Freedom Convoy movement.

“The Ontario Superior Court of Justice has granted a request from the provincial government to freeze access to millions of dollars donated through online fundraising platform GiveSendGo to the truckers’ convoy protesting COVID-19 restrictions in Ottawa and at several border crossings,” the CBC reported on Thursday.

The premier for Canada’s most populous province, Doug Ford, issued the following statement:

“Today, the Attorney General brought an application in the Superior Court of Justice for an order pursuant to section 490.8 of the Criminal Code prohibiting any person from disposing of, or otherwise dealing with, in any manner whatsoever, any and all monetary donations made through the Freedom Convoy 2022 and Adopt-a-Trucker campaign pages on the GiveSend Go online fundraising platform.”

“This afternoon, the order was issued,” the premier said. “It binds any and all parties with possession or control over these donations.”

GoFundMe has seized more than $10 million in funds for Freedom Convoy 2022 that was intended to fund truckers standing up for Canadians’ human rights. The left-wing crowdsourcing platform claimed that the “peaceful demonstration has become an occupation” now.

The Ottawa Police department claimed responsibility for telling GoFundMe to shut it down.

GoFundMe states that it is allowing refunds or permitting the money to be sent to “credible charities.” The platform does has a message for people to “submit a request” to get their donations back.

State attorney generals are now investigating crowd-sourcing platform GoFundMe for alleged fraud for claiming the Freedom Convoy 2022 fundraisers had violated its Terms of Service. They might need to add human rights complaints against the Canadian provincial governments for blocking peaceful protesters from exercising their rights.

Jacob Wells, GiveSendGo founder and CEO, has slammed GoFundMe and Big Tech for their “authoritarian style of social platforms.”

“Big Tech really has taken it upon themselves to be the arbiters of truth. And it’s a place that they were never intended to be, and it’s caused more damage than good,” Wells told Fox News Digital. “We are now stepping into that place because there is a natural pushback from many people because America was founded on these ideas of freedom.”

“This is like the tip of the spear and what is coming in a tsunami of technology that is pushing back against this authoritarian style of social platforms where it’s like these people just think that they get to control the narrative,” he said. “It’s mind-blowing to me that they actually think that is the way that it ought to be, because in my perspective, it only breeds more distrust and more vitriol, more divide.”

On Friday, TD Bank told CTV News that it would “apply to surrender to an Ontario court the money that had not been refunded by GoFundMe, totalling about $1 million, as well as some $400,000 the group had accepted through direct donations.”

“TD has asked the court to accept the funds, which were raised through crowdfunding and deposited into personal accounts at TD, so they may be managed and distributed in accordance with the intentions of the donors, and/or to be returned to the donors who have requested refunds but whose entitlement to a refund cannot be determined by TD,” spokesperson Carla Hindman said.

Keith Wilson, the lead attorney for the Freedom Convoy movement, said that the group “planned to fight to retrieve any money they had raised,” CTV reported.  The Freedom Convoy groups is now turning to a cryptocurrency fundraiser that has raised nearly $1 million.

“We will be taking expedited legal steps to have the restrictions on the donated funds lifted as soon as possible,” Wilson said in an email to CTV News.

The Freedom Convoy organizers are now turning to a cryptocurrency fundraiser based on Satoshis.

HonkHonkHodl is helping to spearhead the fundraising. It has raised over one million dollars already.

@HonkHonkHodl Just raised over a million dollars in Bitcoin for the Freedom Convoy 2022. With a massive donation by one individual for around $275,000 or 5 Bitcoin (1 Bitcoin = 1,000,000 Satoshi’s) Their message is in this photo 👇🏼 🇨🇦 pic.twitter.com/gHhw2YwroL

“In a video posted on Facebook by supporters, convoy organizers discuss the strategy online for fundraising, turning to a crowdfunding website that raises money in a cryptocurrency called Satoshis — about US $913,000 as of Friday afternoon,” CTV reported.

“The principle philosophy of what Bitcoin is is freedom,” one says. “For everyone who had their voice stolen by ‘GoFraudMe’, ‘GoFundMe,’ you should feel solace that there are now alternatives.”

This is the next evolution of the Freedom vs. Fascism movement. Big banks and big governments are aligned in their goal to violate human rights and impose authoritarian dictatorships. The people need to organize against this threat to their rights, and cryptocurrency is now an increasingly important part of the freedom movement.

https://smartzune.com/canadas-major-banks-are-now-reported-to-be-all-offline-after-trudeaus-emergency-order-to-freeze-freedom-convoys-accounts/ Canada’s Major Banks are Now Reported to Be ‘All Offline’ After Trudeau’s Emergency Order to ‘Freeze’ Freedom Convoy’s Accounts

Amazon refreshes The Marvelous Mrs. Maisel for the fifth and final season

The GOP has a Trump problem on abortion