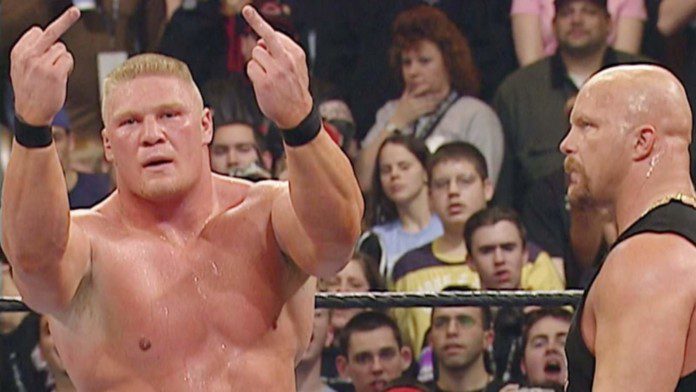 Brock Lesnar had one of the best freshman months in WWE history. During his rapid progression, he wrestled and defeated nearly all of the top names in professional wrestling history.

In 2002, WWE sought to set up a contest between Brock Lesnar and “Stone Cold” Steve Austin. In an episode of RAW, there should have been a qualifying match for the King of the Ring event. But once Austin abruptly left the company, that never happened.
“I had to wrestle (Hulk) Hogan,” Lesnar recalls on The Pat McAfee Program. “I struggled, you know, Dwayne, ‘The Rock’. The Undertaker, Ric Flair, but I didn’t beat Steve (Austin) and I was really thinking about this today. ”

Austin expressed his displeasure at being supposed to lose first Brock Lesnar in a match with no predictions or plot will be broadcast on television instead of pay-per-view. Lesnar believes he understands Austin’s decision in retrospect.
“I understand from a business perspective,” says Lesnar. “At the time Steve left and you know… didn’t want to work with me and that was probably the right decision for him at the time. You know, I don’t hold a grudge against it. Business is business, I got that right away. I’ve had a lot of great mentors, you know, coming up in the business. “

In 2015 there was talk of a potential Austin vs Lesnar match scheduled for WrestleMania 32. Austin attended the show but did not compete in any matches.
Austin is expected to return to the ring. Austin has been in talks with WWE about returning to the ring at WrestleMania 38. Since losing to The Rock at WrestleMania XIX, Austin has not entered a professional wrestling competition. With Austin likely to return and Brock Lesnar at his peak, this dream matchup is likely.

Also read: ‘I look at him more as a father figure’; Brock Lesnar Reveals His Relationship With Vince McMahon And Dana White

Why horses are a big challenge for video game developers