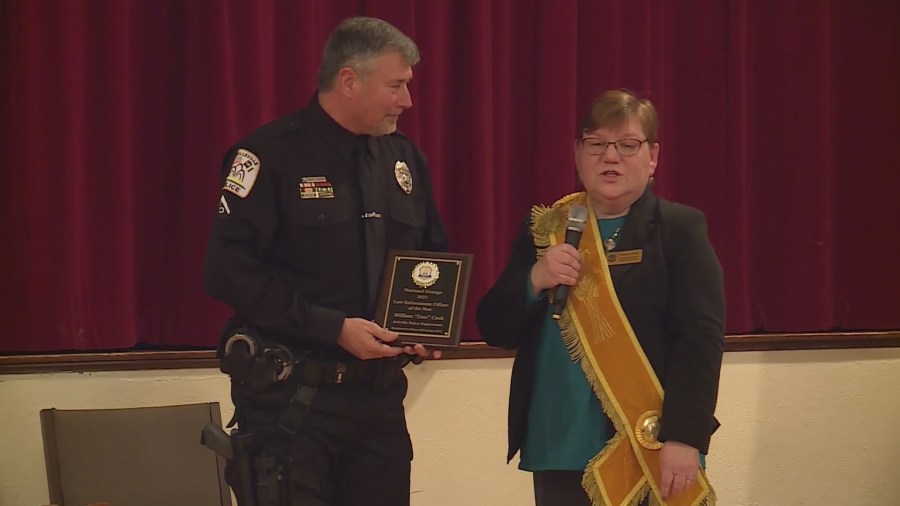 “I was both honored and surprised,” Belleville Police Officer Dan Cook said. “It’s a great feeling to know we have supporters, despite today’s climate, and it’s great to have people thanking us for our service, standing behind us for what we do.”

Grange was founded in 1867 as a national organization with a focus on local efforts.

“Grange is a family, community organization with roots in agriculture,” according to the organization’s website. “Our members have the opportunity to learn and grow to their full potential as citizens and leaders.”

The honor is awarded following Officer Cook’s heroic act during an arrest on February 14, 2021.

“We had a robbery, the suspects ran away, I located the car, it was a chase, at the end of the chase we caught them,” Cook said. “It’s not an ordinary day but that’s what we do.”

Cook said three robbers were arrested and wanted by 14 agencies on 60 criminal charges in two states.

He said he was part of a team that just did their job and never thought it would end with this honor for a second.

“We had a job to do and we all did it that day and it worked for us,” Cook said.

He was selected from among 17 Illinois officers as state law enforcement officer of the year. He was then selected among the 37 highest-ranking state officers in the nation to receive the award Friday night.

“The country has recognized what he has done as a law enforcement officer in his career up to this point. It’s not just Belleville. It’s not just Illinois. It’s the country,” said Lynette Schaeffer, president of the executive board of National Grange and president of Illinois Grange.

“When you have a great patrolman like Dan Cook, you will be proud to show him off,” said Belleville Mayor Patty Gregory.

Pastor Victor Mateo Convicted For Killing His Wife With Machete

Anthony Weiner tells Sean Hannity incredulously that he has changed