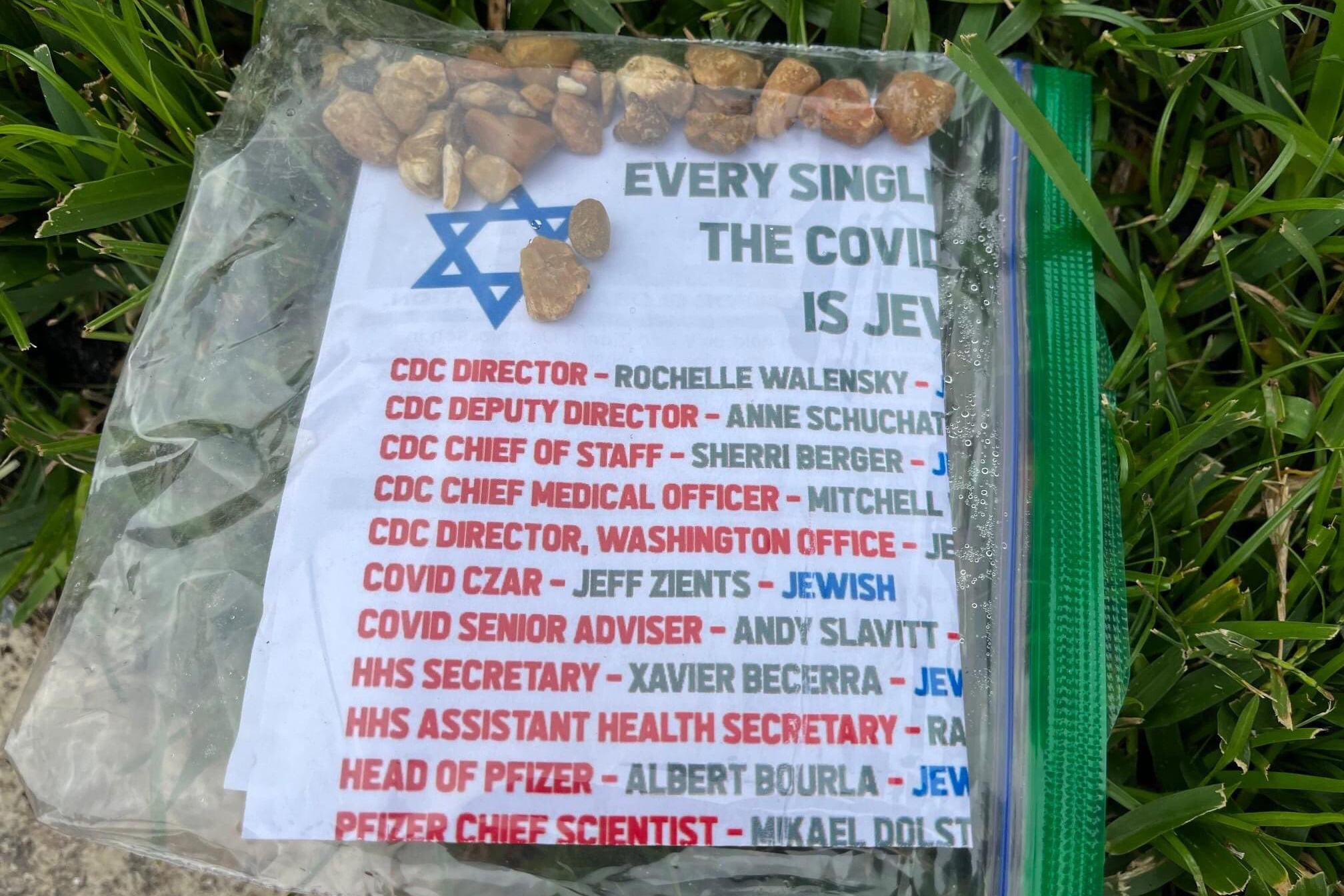 Residents of at least three cities across the country found antisemitic flyers outside their homes Sunday, authorities said.

The flyers, which were distributed overnight in neighborhoods in and around Denver, San Francisco and Miami, all appeared to be similar in nature, according to local NBC affiliates and regional officials.

“Every single aspect of the COVID agenda is Jewish,” said many, if not all, of the flyers. Listed on the paper were government officials who have played parts in managing the coronavirus pandemic and who the flyers say are Jewish, according to local NBC affiliates and regional officials.

Many of the flyers were placed in plastic bags weighed down with rice or pebbles before they were thrown onto lawns and stoops.

The Denver Police Department said its Bias Motivated Crime Unit was investigating the flyers, which were left outside homes in the Country Club neighborhood.

The flyers in all three states appear to have been distributed by “a loose network of individuals that engages in antisemitic stunts to harass Jews,” said the Anti-Defamation League statement. “They work alone, in small cliques and occasionally travel across the country to work together in larger teams.”

ADL Mountain States Regional Director Scott Levin said, “It is especially despicable and disgusting that a group of antisemites would choose to distribute hateful, antisemitic propaganda just one week after the hostage situation at the synagogue in Colleyville, Texas.”

Four people, including a rabbi, were held hostage for more than 10 hours at Congregation Beth Israel on Jan. 15. They were all released safely, and the man who was holding them died.

“It is important to expose this type of hateful activity and to shine a light on the increase in antisemitism in Colorado and across the country,” Levin said.

In Miami, police said the had a lead on who might have distributed more than 200 flyers in the residential neighborhoods Mid-Beach and North Beach. After they increased patrols at religious institutions, police saidthey found that a rental car a suspect or suspicious might have used while the flyers were spread.

Miami Beach Mayor Dan Gelber shared a photo of the flyers in plastic bags on Twitter. “There is no place for this in our community & we will do all we can to make that point clear,” he said.

Miami-Dade County Mayor Daniella Levine Cava said: “As the Mayor of our beautifully diverse, inclusive and caring community, and the first Jewish Mayor of Miami-Dade County, antisemitism and all acts of hatred and bigotry cut especially close to my heart.”

NBC Bay Area reported that the flyers had the same wording and list of names as the ones left in Denver and Miami.

“Let me be very clear: this kind of antisemitic hatred has no place in our city,” she said on Twitter. “Our communities have been frightened by the rise in hate crimes, and we must do everything we can to stand against it wherever it occurs.”

The flyers, and the way they were distributed, resemble some that were found in a Missouri City, Texas, neighborhood last month.

The Fort Bend County judge, or chief executive, KP George, said at the time: “Let me be clear: The anti-Semitic flyers placed in Fort Bend aren’t just incapable, they are reprehensible and have no place in our society. I and all of our diverse communities stand with our Jewish Brothers and Sisters , now and always, against hate.”

https://www.nbcnews.com/news/us-news/antisemitic-flyers-found-neighborhoods-least-3-cities-rcna13500 Antisemitic flyers found in neighborhoods in at least 3 cities

US approves major arms sale to Egypt despite rights concerns

Super Bowl LVI has a large number of ratings for NBC